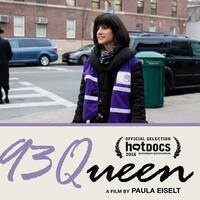 93 Queen is set in the Hasidic enclave of Borough Park, Brooklyn, where EMS corps have long been the province of men.

Though the neighborhood is home to the largest volunteer ambulance corps in the world known as Hatzolah, that organization has steadfastly banned women from its ranks. Now a tenacious cast of dogged Hasidic women are risking their reputations by taking matters into their own hands to provide dignified emergency medical care to the Hasidic women and girls of Borough Park.

"Forget Supergirl and Wonder Woman. To see a real female superhero in action, check out 93 Queen." - The Hollywood Reporter.

This screening is made possible by a generous grant from the Littauer Foundation, and is a collaborative effort by Hillel at Ithaca College, the Ithaca College Library, and the Jewish Studies Department of Ithaca College.

Individuals who would like to request accessibility accommodations should contact areid1@ithaca.edu. We ask that requests be made as soon as possible to ensure they can be met.