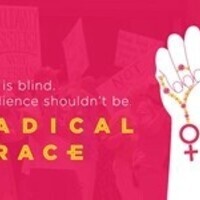 "When the Vatican reprimands American sisters — citing their “radical feminism” — they become the spiritual and symbolic center of a battle for the heart of the Catholic Church. Radical Grace follows three fearless nuns who risk their place in the Church to follow another higher calling: social justice."

We invite you to a special screening of “Radical Grace”, a documentary film about three radical feminist nuns and their fight for social justice in the Catholic Church. The film will be screened in the Park School of Communications Auditorium on December 3rd at 7pm.

The film will be followed by a discussion with filmmaker Rebecca Parrish. Rebecca Parrish is a documentary director, cinematographer, and editor. She has worked as an editor and cinematographer with Peabody and Sundance award-winner, Judith Helfand, Kindling Group and Kartemquin Films. Parrish has also run her Chicago-based film company, Interchange Productions, since 2007. Parrish’s work includes documentary film, Protect Our Defenders, which depicts the stories of military sexual assault survivors as part of an advocacy campaign to reform the justice system within the military.

This program is sponsored by the Office of Religious and Spiritual Life in partnership with the Department of Media Arts, Sciences and Studies and the Minor in Women and Gender Studies.

Individuals with disabilities requiring accommodations should contact the Office of Religious and Spiritual Life at spirituallife@ithaca.edu. We ask that requests for accommodations be made as soon as possible.

Individuals who would like to request accessibility accommodations should contact SpiritualLife@ithaca.edu. We ask that requests be made as soon as possible to ensure they can be met.