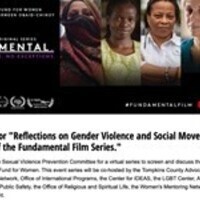 Join the Ithaca College Sexual Violence Prevention Committee for a virtual series to screen and discuss the Fundamental Series created by the Global Fund for Women. This series will allow students, faculty, staff, and community members the opportunity to reflect on the films, discuss how they relate to their own lives or communities, and think about the implications for any social movements they may be passionate about. To learn more about the film series, please visit the Fundamental Series website here. We will be screening the corresponding mini-episode at the start of each event (about 17 minutes) prior to having a discussion, and you are also welcome to watch them on your own prior to joining. A zoom link for the discussion will be sent to all registrants on the day of the session.

Rights Not Roses: Ending Child, Early, and Forced Marriage in Pakistan: Child, early, and forced marriage is any marriage—either formal or informal—where at least one of the parties is below the age of 18 and has not expressed full, free, and informed consent. It is a human rights violation, and a harmful practice that disproportionately affects girls. Every year, 12 million girls are married before they turn 18—nearly one every two seconds. It happens in all parts of the world, from the Middle East to Latin America, South Asia to the U.S. In “Rights Not Roses,” we hear directly from Zarmina, a survivor of early marriage. We meet a network of community activists fighting to end the scourge of child, early, and forced marriage in Pakistan, where 21% of girls are married before the age of 18. These include Rukhshanda Naz, a human rights attorney and long-time women’s rights leader who is fighting in Pakistan’s courts to extricate girls like Zarmina from early and forced marriages, and whose passionate advocacy for ending child marriage is informed by her family’s own experiences. Watch the episode trailer now.