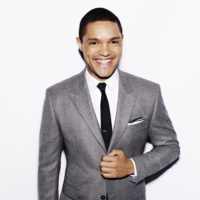 Tickets are sold out.

Trevor Noah, host of “The Daily Show” on Comedy Central, will bring his stand-up act to Ithaca College on Saturday, April 8, for a 7 p.m. show in the Athletics & Events Center.

Please note: Since you will need a University Tickets account to complete your ticket order, create your account ahead of time for a faster and easier purchase experience.

Maximum number of tickets per person is 6.

All seats are reserved, and a large screen will be set up to ensure that all audience members have a view of the stage.

If you're having problems with ticket orders, please email iceventstickets@ithaca.edu.

Noah succeeded Jon Stewart as host of “The Daily Show” in September of 2015, after having served for the previous year as a recurring contributor. Providing a daily dose of “fake news” since long before the term became part of today’s headlines, the Emmy and Peabody Award–winning program views current political and cultural happenings through a sharp, satirical lens.

Noah was born in Johannesburg, South Africa. His mother was Xhosa and his father Swiss-German, making his parents’ interracial relationship illegal at the time. This past fall he released a memoir, “Born a Crime: Stories From a South African Childhood.” Described by the “New York Times” as “by turns alarming, sad and funny,” his memoir recounts — through the prism of family — growing up in poverty in the Soweto township under apartheid and the country’s lurching entry into a post-apartheid era.

Noah began his television career at the age of 18 when he landed a role on the soap opera “Isidingo.” He then hosted numerous radio and television shows and specials, including the South Africa Film and Television Awards and South African Music Awards, while also honing his comedy act.

After moving to the United States in 2011, Noah became the first South African stand-up comedian to appear on “The Tonight Show” and “Late Show with David Letterman.” He was the subject of the 2012 documentary “You Laugh But It’s True,” and later that year he starred in the one-man comedy show “Trevor Noah: The Racist.” In 2015 he filmed his Comedy Central special, “Trevor Noah: Lost in Translation,” at the Lincoln Theatre in Washington, D.C.

Individuals who would like to request accessibility accommodations should contact iceventstickets@ithaca.edu. We ask that requests be made as soon as possible to ensure they can be met.

$20 for students, faculty and staff; $30 for general public