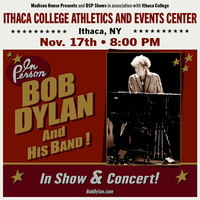 Bob Dylan and His Band

Bob Dylan and His Band will perform at the Ithaca College Athletics and Events Center at 8 p.m. on Sunday, November 17. Doors open at 7 p.m.

Tickets for the all-ages show can be purchased through DSP Shows. A limited number of $25 discounts are available for IC students only. Students can receive their discount by entering the first four digits of their student ID (without the dash) in the promo code field on the ticket purchase page.

A legendary folk singer-songwriter, Dylan rose to fame in the 1960s with hit songs like “Blowin’ in the Wind” and “Like a Rolling Stone.” He has won 10 Grammy Awards, one Academy Award and one Golden Globe Award. In 1988, he was inducted into the Rock and Roll Hall of Fame. Dylan was awarded the 2016 Nobel Prize in Literature “for having created new poetic expressions within the great American song tradition.” He was awarded the Presidential Medal of Freedom in 2012.

Dylan last performed at Ithaca College in 1994, in a show held at Ben Light Gymnasium.

Individuals who would like to request accessibility accommodations should contact info@dspshows.com. We ask that requests be made as soon as possible to ensure they can be met.

You're not going yet!

Register
This event content is powered by the Localist Community Event Platform.