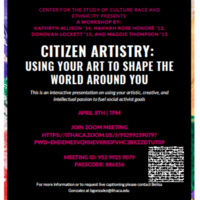 Citizen Artistry: Using Your Art to Shape the World Around You

Citizen Artistry: Using Your Art to Shape the World Around You invites attendees to explore the link between their role as a citizen in society and their role as an artist and/or academic. The Co-Founders of ICTA BIPOC will guide attendees through a series of conversations and exercises that allow them to investigate this link so that they may navigate personal or career goals in conjunction with social responsibility.

Maggie Thompson ‘15 is an actor and activist from Brooklyn, New York. She is a graduate of Ithaca College and of LaGuardia Arts. Maggie can be seen on stages across the country (recent stints include Dallas Theatre Center, The Old Globe and Shakespeare Theatre Company) or waiting in line at the bagel place.

Kathryn Allison ’14 is a Broadway performer, content creator and recording artist. Her long-awaited debut solo album “Something Real” was released in February 2019. She also the co-founder of @ICTA_BIPOC and a Board Member at Community League of the Heights. Starting March 12th you can catch Ms. Allison virtually! Other credits include: Company, Wicked and Aladdin on Broadway. TV/Film/Recordings: John Cameron Mitchell’s “Anthem; Homunculus,” “Loveville High,” “Our Cartoon President,” “Elementary,” “Bachelorette.” @kathryndallison www.Kathryn-Allison.com

Donovan Lockett ‘15 is an actor-writer-educator originally from New Orleans and based in Philadelphia. She has performed regionally with Philadelphia Theatre Company, Walnut Street Theatre, Theatre Horizon, Hangar Theatre, and Scranton Shakespeare, amongst others. She also acts in film/TV, having most recently shot a commercial for Angry Orchard. Donovan is the co-creator of the podcast @Blacklight_the_Spotlight, which tackles representation and inclusion in the arts. She has worked for 10+ years teaching theatre and creative writing to students K-12 in incredibly diverse communities all over the country. Even in quarantine, the effect of virtual arts education is unparalleled!

Hannah Rose Honoré is an actor-singer and small business owner originally from New Orleans currently based in Brooklyn. From 2018 - 2019, she was the face of the hit Olay musical commercial series starting with the viral "I Can't Wait to Wash my Face" and more! In fall 2020, she launched her small business Roovy by Rose selling pop culture inspired crafts. @HanRose @RoovyByRose

Individuals who would like to request accessibility accommodations should contact bgonzalez@ithaca.edu. We ask that requests be made as soon as possible to ensure they can be met.

Free and open to the public.