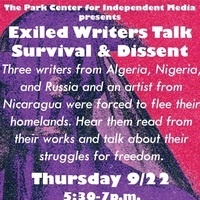 The Park Center for Independent Media invites you to an evening celebrating four writers who have braved danger and refused censorship to exercise their artistic independence.

All four were forced from their homelands and found sanctuary through a City of Asylum in Ithaca, Pittsburgh, or Detroit. Timed with Banned Books Week, this event is part of a tour of solidarity between the programs of these three cities. It also marks the 20th anniversary of Ithaca City of Asylum protecting and supporting writers at risk.

This event is co-sponsored with the Finger Lakes Environmental Film Festival, Ithaca College Department of Writing, and the Department of Literatures in English. Read more about the speakers here.

Individuals who would like to request accessibility accommodations should contact hbrooks@ithaca.edu. We ask that requests be made as soon as possible to ensure they can be met.

This event content is powered by Localist Event Calendar Software.