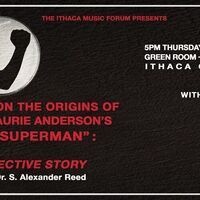 Join us for the last Ithaca Music Forum of 2019!

Laurie Anderson's 1981 breakout hit "O Superman" remains one of the strangest and most mysteriously compelling moments in late-20th century music. A crossover between minimalist new music and icy new wave, the song reached #2 on the charts and was instrumental in launching both performance art and music video as popular media of the 1980s.

In this talk, Alex Reed displays previously unseen and unheard elements of the song's curious beginnings and details the detective work that uncovered them. The presentation is adapted from his forthcoming book with Oxford University Press on Laurie Anderson's debut LP Big Science.

Individuals who would like to request accessibility accommodations should contact drifkin@ithaca.edu. We ask that requests be made as soon as possible to ensure they can be met.

Free and open to the public. Reception to follow