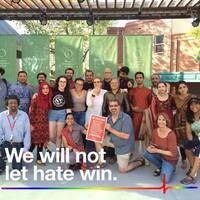 “On Common Ground” is an ongoing project, funded by a grant from the U.S. Embassy, Islamabad, that explores the effects of violence on public space. Since October 2016, U.S. and Pakistani artists have worked together to create an original theatre piece based on Pakistani artists’ experiences and perceptions of public space. Professor Kathleen Mulligan, producer and vocal coach, spent twelve days in Islamabad in June 2017 preparing for the first performance of On Common Ground in Islamabad. The production then toured to Oregon, performing to capacity audiences at The Artists’ Repertory Theatre (Portland) and The Oregon Shakespeare Festival.

In the next stage, two actors from Islamabad will spend three weeks in residency in the Department of Theatre Arts at Ithaca College. The actors, along with the U.S. team, will work with Ithaca College students to create additional material on the theme from a U.S. perspective. Some of the scripted material may be included in Theatre Wallay’s tour of On Common Ground throughout Pakistan in spring 2018. The Ithaca College visit will culminate in a staged reading of material created during the three-week residency. (There will be an additional performance on Monday, November 13 at 7pm at The Cherry Arts Space, downtown Ithaca).

Individuals who would like to request accessibility accommodations should contact kmulligan@ithaca.edu. We ask that requests be made as soon as possible to ensure they can be met.

This event content is powered by Localist Event Calendar Software.