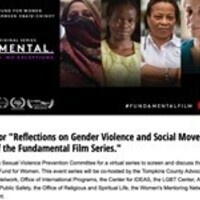 Join the Ithaca College Sexual Violence Prevention Committee for a virtual series to screen and discuss the Fundamental Series created by the Global Fund for Women. This series will allow students, faculty, staff, and community members the opportunity to reflect on the films, discuss how they relate to their own lives or communities, and think about the implications for any social movements they may be passionate about. To learn more about the film series, please visit the Fundamental Series website here. We will be screening the corresponding mini-episode at the start of each event (about 17 minutes) prior to having a discussion, and you are also welcome to watch them on your own prior to joining. A zoom link for the discussion will be sent to all registrants on the day of the session.

Living Out Loud: LGBTQI+ Rights in Georgia: While officially a secular nation, church and state are far from separate in Georgia, where homophobia is common. The Christian Orthodox Church holds great power including among government officials, resulting in homophobic and transphobic violence and discrimination throughout the country, hate crimes and murders, and state-ordered threats against LGBTQI+ individuals and activists. At the same time, the feminist and LGBTQI+ movements in Georgia are growing stronger and more organized. In “Living Out Loud,” we meet Eka Aghdgomelashvili, a Georgian feminist activist and trailblazer who led successful efforts to pass anti-discrimination laws in this former Soviet state. We also meet a young artist, Eka Tkemeladze, and fellow community activists who are mobilizing in the tense days leading up to the International Day Against Homophobia and Transphobia (IDAHOT) rally. Watch the episode trailer now.