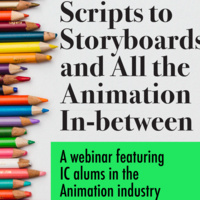 Scripts to Storyboards and All the Animation In-Between

IC alums in the world of animation will be sharing stories and wisdom of how they broke into animation, aspects of today's animation industry, and offer advice and tips for anyone interested in the many opportunities available in today's animation landscape. ICLA alum Colleen McAllister will guest-moderate, and panelists will be ICLA alum Colleen Evanson, writer for DuckTales, and Scott Oberholtzer, animator for South Park.

The registration link is here.

Colleen McAllister '08 began her animation career with Chris Meledandri at Illumination Entertainment as a Creative Executive and Producer on the Minions and Despicable Me franchises, The Secret Life of Pets, SING, and The Grinch. She then moved to Hasbro Studios as Director of Current Series and produced My Little Pony: Equestria Girls, Hanazuki, the Littlest Pet Shop series, Micronauts and was Co-EP on the Hanazuki: Full of Treasures theatrical feature short.

As a writer, McAllister developed two animated feature films for DreamEast Pictures, and one for Disney. Her original pilot “Pussies” was selected for the HBO sponsored Blacklist TV lab. She was most recently the Story Editor on Netflix’s musical comedy series, “I [Heart Emoji] Arlo” releasing in 2021. She is currently developing an unannounced property with Netflix.

McAllister received her undergraduate degree from Ithaca College and an M.F.A. from USC’s Peter Stark Producing Program. She loves writing broken characters who don’t need to be fixed.

Colleen Evanson '06 is an Emmy-nominated writer from Disney’s reboot of DuckTales and managed to not ruin anyone’s childhood. In fact, Entertainment Weekly listed an episode she co-wrote as one of “The 30 Best TV Episodes of 2019.” Currently, Evanson is in development at Disney TV Animation. Additionally, she’s done creative consulting and written multiple freelance episodes with Netflix Animation, Cartoon Network, and Amazon Prime. For a brief and ridiculous time in 2013 Evanson was considered “Vine famous” and won an LA Weekly Web Award for “Best Vine Presence.”

Scott Oberholtzer '95, an animator on South Park, graduated Ithaca College in 1995 with a BFA in Film, Photo, and Visual Arts. He was in the first ICLA class in the spring of 1994. After graduation, Oberholtzer moved to Los Angeles and began working on film and TV sets as a PA, grip, and production secretary. He worked a few gigs on films like Romy and Michele and The Lost World, then decided he wanted to return to his first love, animation.

Scott began working on South Park season one as assistant to the animation director. He taught himself anima- tion software and talked his way into animating on the South Park movie, then came back to the TV show as an animator. He's been killing Kenny and animating lots of other crazy stuff ever since.

Scott produces satirical political animated shorts under the name HATIOHEAD on YouTube. He has been working on writing and creating his own animated IP for several years.

Individuals who would like to request accessibility accommodations should contact jbassingerflores@ithaca.edu. We ask that requests be made as soon as possible to ensure they can be met.

It was VERY informative and the discussion was both from a creative side and an industry side, which were multiple interesting perspectives to hear about!