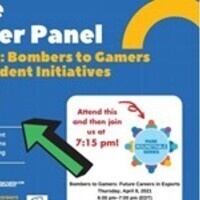 The After Panel: Part 2 Bombers to Gamers. Student Initiatives

The After Panel: Part 2 Bombers to Gamers / Student Initiatives, April 8

A Park Conversation dubbed "The After Panel" has been scheduled for Thursday, April 8, 2021 at 7:15 p.m. The conversation is hosted by Ithaca College Students engaged in development, competition and broadcasting activities in gaming and/or Esports and follows a formal webinar hosted by Alumni Affairs featuring IC alumni.

Xing Ke Elrick IC'21 is leading a team in game development as an internship during the Spring 2021 term through Park Professional Development. Alex Estabrook an instructor in the Park School serves as her faculty advisor in this initiative.

Additional members of the game development team include:

Esport competitions offer a fun and constructive alternative to traditional sports leagues. Through community Esports, the IC club is promoting healthy competition, creativity, and social engagement with peers who share a love of gaming!

Esports broadcasting and production involves the broadcasting of video gaming tournaments or competitions. Video game esports events can be both spliced together from dozens or even hundreds of locations around the world, while more major events bring gamers to a central location complete with complex console setups.

Park Professional Development offers a series of virtual forums to make new connections, spark insights and build momentum in our shared interest in communications. We gather online in an open, accessible format that engages our community and allies in driving the discussion around our mutual industries and professions.

Individuals with disabilities requiring accommodations should contact Ann Marie Adams at aadams4@ithaca.edu or (607) 229-8071. We ask that requests for accommodations be made as soon as possible.

Individuals who would like to request accessibility accommodations should contact aadams4@ithaca.edu. We ask that requests be made as soon as possible to ensure they can be met.