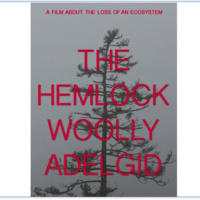 Screening of the documentary made by Ithaca College alumn Chris Foito "The Hemlock Woolly Adelgid" a film about the loss of an ecosystem and discussion with local experts.

The film, “The Hemlock Woolly Adelgid – A Film About the Loss of an Ecosystem” aims to engage and educate the viewer on this all too often, over looked invasive species by explaining its past, present, and what could easily be the future if significant action is not taken.

Through the use of cinematic visuals and archival footage of other forest pests, specifically the Emerald Ash Borer, the film illustrates the vital importance of The Eastern Hemlock Tree as a foundation species in North American forests, and raises the questions of what should be done to prevent the spread of the Hemlock Woolly Adelgid and the growing phenomena of invasive species as a whole.

The Hemlock Wooly Adelgid Documentary is made with the support of the Cayuga Lake Watershed Network, a non-profit focused on environmental conservation.

Individuals who would like to request accessibility accommodations should contact jbarney@ithaca.edu. We ask that requests be made as soon as possible to ensure they can be met.